For some people, crating a dog is a form of animal cruelty. They think it is sad when a dog has to be locked up behind bars. Dogs, unlike us, don’t have associations with bars. We immediately think of a prison. Dogs don’t know that word.

A crate can be a useful tool to prevent problem situations and be a safe place for the dog and puppies. But first of all, the dog must learn that a crate is a safe place.

Once the crate is in the house, the dog will receive all of its meals in the crate. You place the food in the crate so that he can stand outside the crate and only have to put his head in the crate to get to it. The tray is pushed further and further back. Feel free to take a week or three for this. If you see that your dog finds it scary, move the bowl a little more towards the opening of the door. You put the treats he gets from you in the crate. You also put his toys (preferably his favorite toys) in the crate. Don’t lure the dog, he has to step into it himself. The door will remain open for a while, the dog may be startled if you close the door too quickly.

If the dog is going to check in the crate at a certain point to see if there is a treat or a toy, then you give a command here, for example ‘bench’. If your dog knows the command and then he quietly goes to his crate, give the dog a treat and close the door. Don’t put too much emphasis on this. Before the dog has finished its bone, you have already opened the door again. You will also slowly increase the keeping of the door closed. Also, go out of the room for a moment. Don’t do this too long in the beginning. You build up everything slowly so that the dog can learn that a crate is a safe place for him. If the dog has gotten used to it, it will definitely crate itself.

Golden rules for Crating a Dog:

A crate must be a safe place for the dog. If you have children, the crate is off-limits for the children. The dog should be left there alone and the children should not see the crate as a kind of climbing frame or against which you can throw something with a lot of noise.

If you have been away and the dog was crated, do not let it out immediately. First, take off your coat, talk to the dog, and then open the crate quietly. Your dog will then learn to wait quietly for the door to be opened.

A crate is not intended to allow the dog to sit in it for most of the day. A dog must be able to move freely.

Bench as an aid:

The crate can be a good aid if your children have friends over and it is quite busy. The dog then rests in the crate.

It is safer for the dog to sit in a crate while driving. Especially for those dogs who cannot sit still during the car ride and who keep your attention away from the traffic.

The crate can also offer a solution for toilet training. Most dogs do not soil their litter and will not do so in the crate. So if you can’t keep an eye on the puppy for a moment, you can put him in the crate so that the number of accidents in the house is less.

If you have already bought a large crate because otherwise, your dog will no longer fit in it, make the crate a bit smaller by putting a box in it, otherwise, he might pee in a corner where he is not lying.

Not Crating a Dog:

If your dog scraps while you are away, or you have an anxious dog, the crate is not an option. In case of demolition in your absence, there may be more to it, such as separation anxiety. If you put a dog with separation anxiety in a crate, it may be that the dog becomes so stressed that it causes itself to damage. You will first have to do something about separation anxiety.

Potential problems after or Crating a Dog:

Some of the issues you may face during or after a dog creating. You must handle these issues in a proper manner:

If your dog is crying or wheezing in the crate at night, it is difficult to determine if it needs to be walked or if the dog is howling to get out of the crate. If the dog has just been out for a walk and it is squeaking, the dog may be trying you out. You must ignore the beeping. It is quite normal for the dog to squeak or howl the first night (s) to get your attention.

If you followed the step-by-step training, you never rewarded the dog by opening the door when he or she squeaked. Try to keep this up. If you don’t, you will teach the dog to squeak long and hard to be released. Never get angry or hit the crate when the dog is squeaking. The association with the bench must remain positive!

If you think the dog needs to be taken for a walk, do it briefly and “businesslike” and don’t give the dog enthusiastic attention. Don’t play with the dog either.

If the squeaking doesn’t stop, you may have gone through crate training too quickly. You can consider starting (partially) over again. In any case, try to make the association with the crate positive at all times. Take a few steps back and start practicing with the door open and/or rewarding for short periods in the crate.

You can practice with the crate to go away from home for short periods. It is important that you take small steps. However, it is not wise to use the crate as a remedy for separation anxiety. This will not solve the problem and may even make it worse. In this case, you can seek advice from a canine behavioral therapist.

As another resource, check out what the humane society says about crate training a dog. 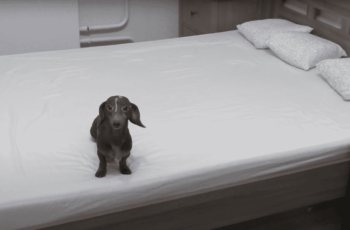 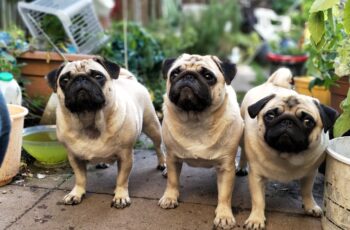