Children and puppies will always love playing. Especially when they’re allowed a bit of freedom, they thrive and they grow.

On this day, Pepper the Dachshund was allowed by her mom to play on the bed.

That’s something special because beds are usually off-limits. Since Pepper’s not the only furball in the house, mom had to come up with that rule to keep her dogs from wreaking havoc in the bedroom.

She was right to do so because otherwise, these dogs would have torn, shredded, and just made a mess of everything in there.

Pepper and her pal must have done something right because they received a treat. Mom decided she would give her pets a chance to play on the bed.

At first, the Dachshund was not too convinced that she was allowed to hang out in there. It had been a no-go zone for the longest time, so Pepper was a bit hesitant to indulge.

She must have gotten the confirmation she needed because, in just a flash, Pepper was bounding, skipping, and hopping on the bed.

We’ve never seen a dachshund so happy to be playing, and it showed in her grin and flapping ears. Talk about the little joys of being a dog.

She was so into it that Pepper’s doggo pal joined her, stuffed toy firmly held in his mouth. While the dachshund was also into stuffed toys, doing zoomies on the bed was her priority.

Together, these dogs enjoyed their treat. We’ve never seen happier dogs than these two, and it’s a refreshing sight to behold. We hope that they never lose their childlike perspective in life.

Doggo pets somehow remind us that there’s always a good thing that’s waiting to happen – we just need to be patient. Continue being sources of good energy and clean fun, pets! 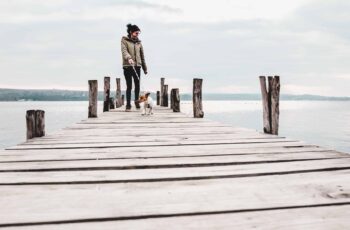