A video clip of an intense clash between a monitor lizard and two dogs taken somewhere in Uttarakhand, India has gone viral. The more than a minute-long clip was uploaded by social media user Himanshu Bhatt. It showed a monitor lizard climbing a tree until two dogs approached and began harassing it.

The video may make you feel sorry for the poor reptile but, at the same time, be impressed due to its stance on the ground.

The viral video captioned, ‘Dogs vs. monitor lizard,’ was taken in the jungles of Uttarakhand. It showed a Bengal monitor attempting to climb a tree but was interrupted when two dogs entered the scene. The dogs took turns in biting its tail until it lost grip and fell to the ground.

The lizard attempted to climb the pine tree once more, but it didn’t last long since the second dog pulled it again. This time, the second dog was biting more ferociously than the first one. Later on, the dogs circled around the lizard, but the poor reptile kept on fighting and warding them back, making things difficult for the harassers.

The dogs were eventually shooed away by the locals, including the persons filming the rare event. Meanwhile, it was reported that as the lizard flees to safety, it doesn’t seem hurt at all. Nevertheless, some members of the online community criticized the intervention for interfering with the local food chain, thus disrupting the ecosystem.

Although watching this viral video can evoke different feelings, it has some light in it – that we should never back down under any circumstances even though life may overwhelm us sometimes.

There are 80 different species of monitor lizards to-date, while the majority are natives of Africa and Asia. India is among the countries where lizards such as these kinds, are widespread. 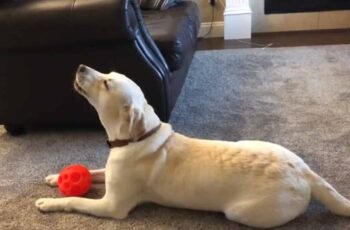