Most heroic dog stories we hear are often about a pet saving their hooman’s life. However, stray dogs can also show their loyalty to humans, even if they are complete strangers to them. It is incredible to see how canines can also be a rescuer despite their harsh life.

Shannon Lorio, a woman from Georgia, met a stray German Shepherd during a car accident back in 2007. She went driving around, trying to calm down after getting into an argument with her husband. The road she was driving on suddenly got very windy, making it difficult to maneuver.

Shannon lost control of the car, which made it steer away from the road. This threw her from her driver’s seat and exit through the back window, causing her to lose consciousness. Shannon woke up and realized that she was lying on the ground with half of her body still inside her wrecked car.

She was scared that no one would find and help her since she ended up in the woods. Right before Shannon passed out again, she saw a black dog come near her. It was a German Sheperd who was sniffing her and seemed concerned about the hooman.

Luckily, this stray dog was a kind and heroic one. Shannon woke up again and saw that her body was finally out of the car wreckage. The stray had pulled her out by grabbing on the hoodie of her jacket. He continued to pull the human up to more than a hundred feet, trying to get her near the road. 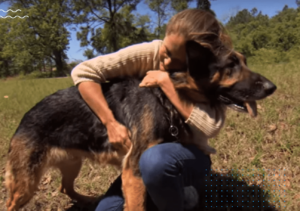 Shannon noticed that the pooch was getting tired of pulling her whole weight. So she hugged the dog’s body and tried her best to stand up. The pupper never gave up and still assisted Shannon until they reached the highway.

A driver saw Shannon and stopped to help her. They were able to call her husband and an ambulance before she lost consciousness again. Paramedics arrived to bring Shannon to the hospital and woke up to the good news that she didn’t need any surgery despite what happened.

Shannon will never forget the kind stray dog’s efforts to save her life. She named the pooch Hero because of his kindness. She then discovered that Hero was rescued by the local humane society after their encounter and is now a certified search-and-rescue dog. 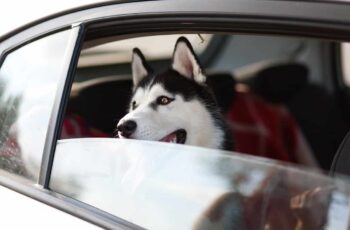